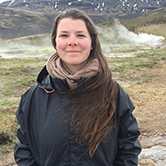 While most ecosystem scientists measure the exchange of carbon dioxide between the land surface and the atmosphere vertically, Emily Romano is measuring the sideways flow of carbon. A second year PhD student in Ted Schuur’s lab at Ecoss, she is researching how much carbon is released from thawing permafrost via headwater streams. Emily conducts her research in Healy, Alaska, in an area surrounded on three sides by Denali National Park where she often sees bears, moose and ptarmigan. She is examining how much dissolved organic carbon is transferred across permafrost landscapes into small streams, and how much of this carbon is released into the atmosphere downstream. 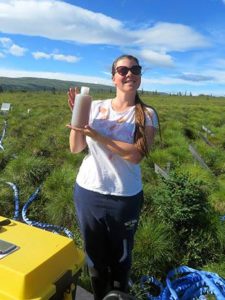 Because dissolved carbon flows laterally through the spongy tundra landscape before entering a stream, Emily takes samples in multiple locations within the Eight Mile Lake watershed. This allows her to try to trace and quantify carbon exported from the study site and released into the atmosphere between the sample points. Measuring the sideways flow of carbon is important because it turns out that estimates of net carbon exchange may be off by as much as 20% if this lateral movement of carbon is not considered. Emily’s work is taking place within a permafrost research site where data have been gathered since 2004 to determine the extent to which warming temperatures and resulting permafrost thaw are releasing additional carbon into the atmosphere, thereby exacerbating climate change.

Emily collected water samples from small streams in her study area for the first time this summer. She filtered the water to remove particulate organic carbon and acidified it to preserve and remove dissolved inorganic carbon. Emily brought all the samples to her lab at Ecoss where she will run them through a Total Organic Carbon analyzer to determine the dissolved organic carbon concentration present in each sample. Later this fall, these same samples will be sent to University of California at Irvine and run through a mass spectrometer to determine the age of the carbon in the samples. The oldest carbon can be inferred to have originated from permafrost and is used as a tracer of the movement of permafrost carbon through ecosystems. This research will improve understanding of how tundra ecosystems will both affect and respond to climate change. 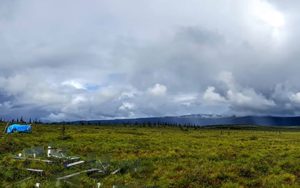 Emily has been interested in the arctic for as long as she can remember. She studied geology and soil science for her undergraduate and master’s degrees, both proving valuable in her current research. Because the Arctic is warming faster than lower latitudes, Emily believes that it’s a very important place for her to conduct research, and she feels very lucky to be working in such a beautiful field location.

Romano’s research interests are to use field and laboratory methods to study the impact of permafrost thaw on carbon dynamics in the Arctic. The implications of this research are to improve current understanding of how tundra ecosystems will affect and respond to climate change. For Romano’s PhD research she will work within the CiPEHR manipulative warming experiment in Healy, Alaska (located 11 miles north of Denali National Park).