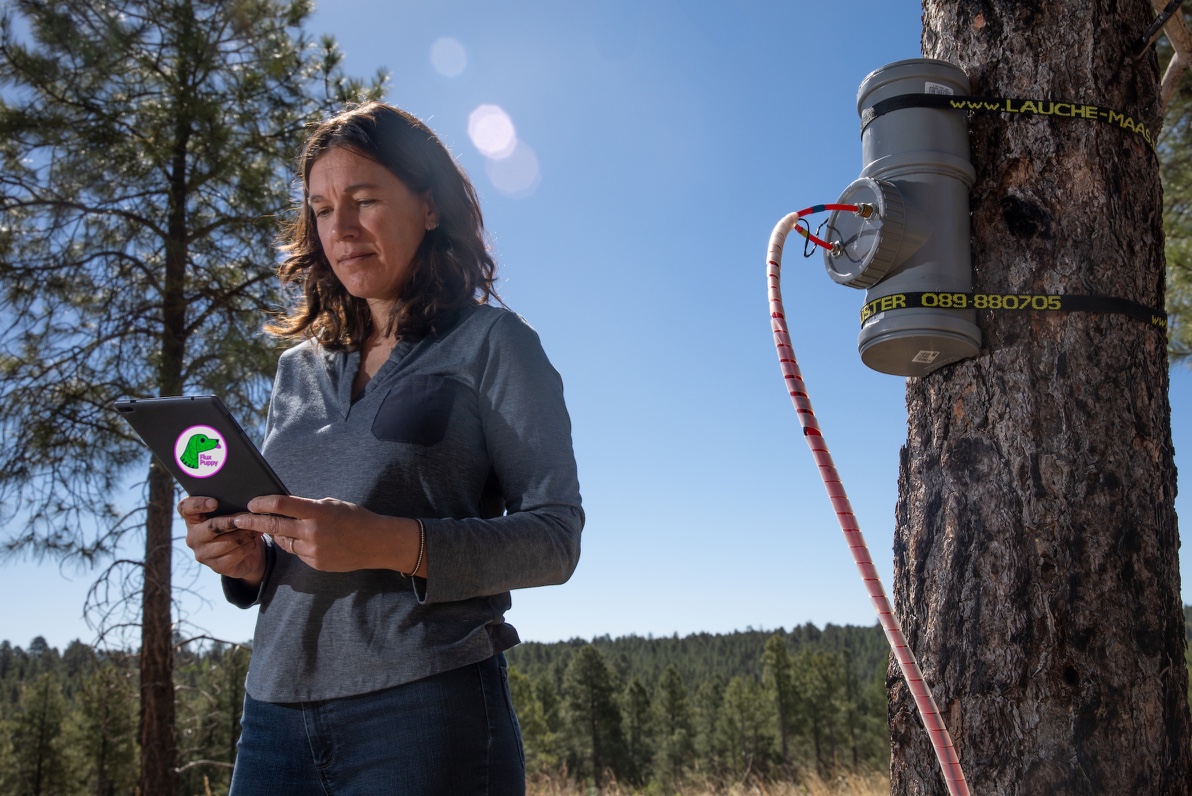 “Today I am taking the flux puppy for a walk at @HarvardForest to measure stem respiration,” NAU postdoctoral researcher Tim Rademacher recently tweeted. With it, a photo of a small white chamber fastened to a tree trunk (think half Dixie cup, half electrode) and hooked at the other end to a handheld tablet sporting a clear, clean graph of CO2 in parts per million. The wire between seems charged with symbolic heft: tying paper to its replacement, or connecting old methods to new. The question Rademacher’s tweet triggers—what’s a flux puppy?—arrives simultaneous to that wish all good marketing teams trade in: I don’t know what it is, but I want one.

And thanks to its open-source code, anyone with access to a handheld Android or tablet who wants to measure flux—that is, how much carbon dioxide or water is respired by plants or soil over a given time period—can take Flux Puppy for a spin.

The new ecological app is the brain-pup of a team of undergraduate researchers who worked with Mariah Carbone and Andrew Richardson in the Center for Ecosystem Science and Society (Ecoss) and School of Informatics, Computing, and Cyber Systems (SICCS) at Northern Arizona University. The four undergraduates—Andrew Greene, Samuel Beals, James Beasley, and Joseph Elroy—developed the app as their SICCS senior capstone project. And, like all good apps, this one makes a task that was once complicated or cumbersome more user-friendly, portable and, therefore, better.

Collecting flux data in the field can be a pain: many of the instruments used to measure carbon flux only talk to Windows operating systems via expensive software, and don’t have data-processing or metadata capabilities. Enter Flux Puppy, whose improvements—along with permitting one not to have to drag their laptop into the forest—offers real time data-processing, metadata and wireless data transfer functionality.

“Working on Flux Puppy, I got a complete experience designing a software product that worked by the end of the year,” said Andrew Greene, one of the undergraduate co-authors on the project. “It was so exciting to know we were building new software that would impact many ecologists and people outside the Carbone lab.”

“There was a lot of enthusiasm for Flux Puppy in the lab,” Carbone said. “I could send an email about Flux Puppy on a Saturday and get five replies, because everyone was just so into working on this tool.” For her, this lab-wide collaboration was exciting to watch. Greene and the other seniors made the app functional by the time they left NAU. Postdoc Tim Rademacher tested it in the field the following summer and suggested ways to make it better. Based on these recommendations and other field tests, postdocs Bijan Seyednasrollah and David Basler reworked and tweaked the code, and lab manager Jim LeMoine tested it again and worked with the undergraduates. “Everyone worked together to get the Puppy up and running,” Carbone said.

So, what’s with the name? “Flux Puppy” is a play on an early flux measurement instrument, the LI-800 Gashound, whose logo was a wag-tailed bloodhound sniffing a CO2 molecule. No one uses an 800 anymore, Carbone said, but it’s a nod to those ecologists who were trained on a Gashound, and a bridge between two generations of the carbon cycling community.

Community is central to Carbone’s approach. In fact, Flux Puppy’s best trick might be that it is open-source, which means that anyone can download the code in order to customize it to their needs or make it better. The team’s paper on Flux Puppy, which appears in the most recent issue of Agricultural and Forest Meteorology,also offers instructions on how to build your own inexpensive flux instrument. That’s important, Carbone said, because it invites to ecosystem science people who don’t necessarily have access to a researcher or academic mentor who can teach them how to build a flux measurement tool. And broadening the community of scientists interested in knowing where the carbon is going is vital to Carbone and her team’s research philosophy. As the authors write, “We encourage the community to take Flux Puppy for a walk, and contribute to development and improvement of the code.”