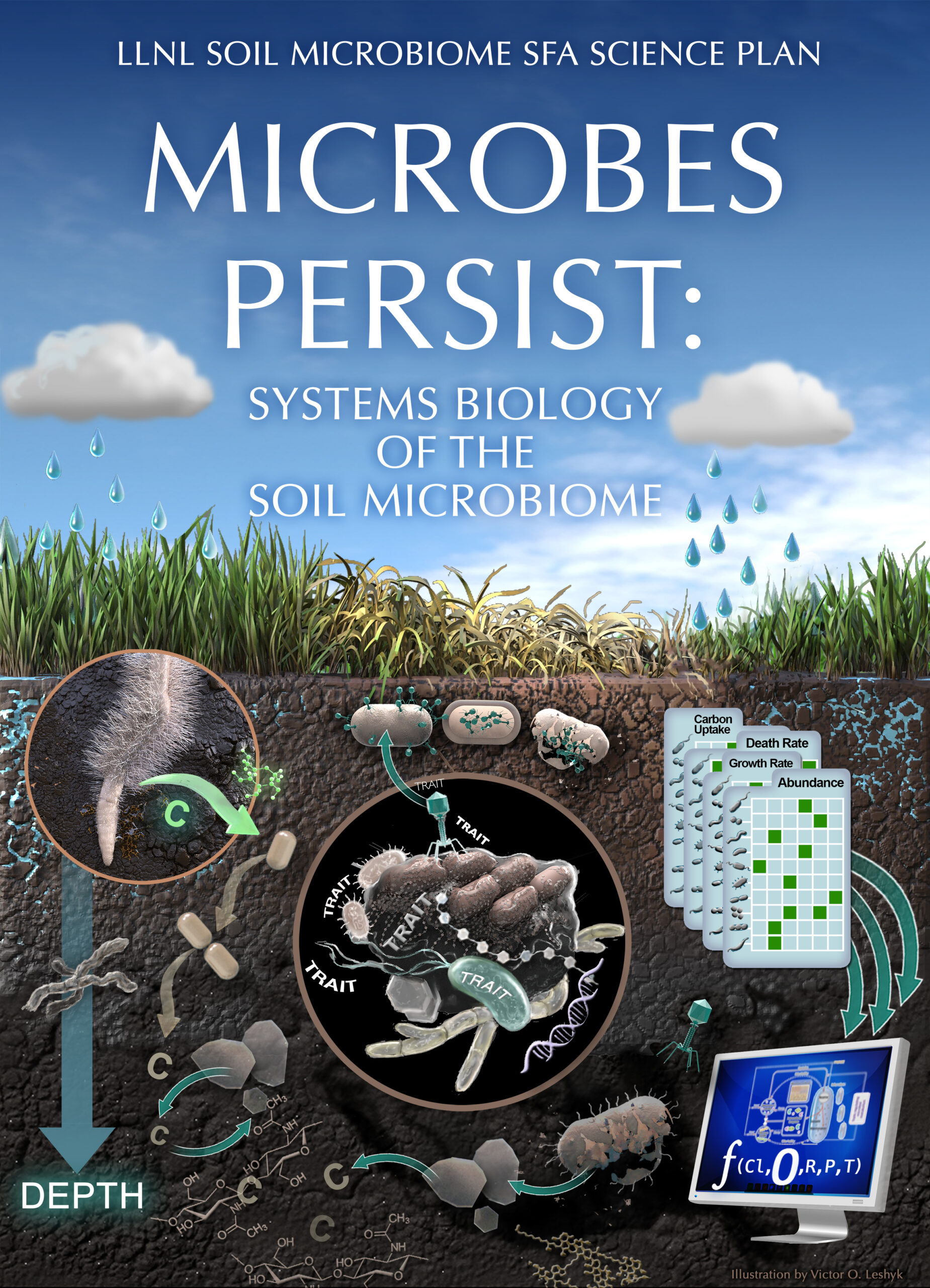 Do dead microbes control the future of Earth’s climate? A team of researchers led by Lawrence Livermore National Laboratory (LLNL) suspects they might. Using new tools, the team can see which soil organisms are thriving and which are dying in California’s changing climate—and what happens to carbon in their cell biomass when they do. The seven-institution team has just been awarded $15M by the Department of Energy Biological and Environmental Research Genomic Sciences Program to investigate how the life and death of soil microbes may author the destiny of most of the world’s soil carbon.

“Our fate is bound up with soil carbon, and its fate is bound up with these intricate microbial communities, whose individual capabilities and interactions we are only beginning to understand,” said Jennifer Pett-Ridge, the lead investigator and Environmental Isotope Systems Group Leader at LLNL. “Using new tools, some of which this team developed, we are asking: how can understanding the microbial lives unfolding in soil tell us about the future of carbon?”

These microscopic lives, the researchers say, are highly sensitive to soil moisture, and undergo significant changes as the weather patterns of our climate (rainfall, temperature) are changing. Pett-Ridge and others are mimicking shifts in California’s climate and tools linking metagenomics with stable isotope tracers to see how microbes respond to these changes. By observing who is actively growing, who is dying, and how the genes expressed in the microbiome change as a result, the research team will learn which functions of microorganisms are most relevant to keeping carbon in the soil, and what indicators predict when it will be released into the atmosphere.

“Some microbial communities seem to respond to drought like many plants and animals do: by waiting for a better year,” said Bruce Hungate, director of the Center for Ecosystem Science and Society at Northern Arizona University (NAU) and a collaborator on the project. “By studying wild microbes, outside of the lab and in their home soils, we’re beginning to understand how dynamic and nuanced these communities really are.”

The team, which includes researchers from LLNL, NAU, University of California-Berkeley, Lawrence Berkeley National Laboratory, University of Minnesota, Pacific Northwest National Laboratory, and University of California-Davis, has been asking questions about the way soil water patterns shape microbial communities, and this new “Microbes Persist” award allows it to ask new questions about how microbial capabilities change with soil depth and over time. A recent study published by the team, the first to apply quantitative stable isotope probing (qSIP) to all the different organisms in soil simultaneously, revealed that soil viruses that infect bacteria near plant roots were among the most active entities in the soil microbiome.

Alexa Nicolas, a graduate student on the project from UC Berkeley, says this project “opens a window into the life and death of soil microbes, to see their molecular afterlives. We can measure this by tracing molecules through microbial life and death along paths shaped by the DNA of the whole soil community.”

“We are now seeing the effects of climate change in our day to day lives, whether it’s wildfire smoke or a drought-depleted reservoir,” said Pett-Ridge. “Microbes are experiencing stresses from some of the same effects. We want to understand how that stress alters their living, growing, and dying, and what that means for the huge reservoirs of nutrients and carbon held in soils.”

The research is funded by the Department of Energy, Office of Science – Office of Biological and Environmental Research and the Genomic Science Program LLNL “Microbes Persist” Soil Microbiome Scientific Focus Area.