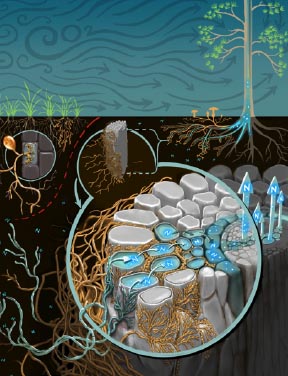 Ectomycorrhizal fungi (the mushrooms connected to the roots of the tree) increase the uptake of nitrogen by the plant, even when that nutrient is scarce in soils. Artwork by Victor O. Leshyk.

Plants can grow faster as atmospheric CO2 concentrations increase, but only if they have enough nitrogen or partner with fungi that help them get it, according to new research published this week in Science. The study was lead by César Terrer Moreno, a PhD student at Imperial College London, and included researchers from Northern Arizona University, the University of Antwerp (Belgium), Indiana University, and New South Wales University (Australia).

The team synthesized more than 80 past experiments, and they found that higher CO2 boosted plant growth, as long as the plants received enough nitrogen. Without added nitrogen, CO2 had no effect, confirming the long-standing idea that nitrogen limits plant response to rising CO2. But there was a major exception: some plants, those with specialized partnerships with soil fungi, were able to respond to the extra CO2, just as much as if they had been fertilized with nitrogen.

“Nitrogen and mycorrhizae are like the X-factors in plant responses to CO2”, said Bruce Hungate, Director of NAU’s Center for Ecosystem Science and Society and Regents’ Professor of Biological Sciences, who was a co-author on the study. “Rising CO2 is not a universal fertilizer, but neither is nitrogen limitation a universal restriction on the CO2 response. The truth is in the middle, and microbes are the key mediators”, Hungate said.

Most plants associate with mycorrhizal fungi, a partnership where the fungus provides the plant with nutrients and water and receives food from the plant in return. But not all mycorrhizae are the same. Arbuscular mycorrhizal fungi specialize in taking up phosphorus from the soil, but not nitrogen, and plants that associated with arbuscular mycorrhizae were unable to respond to CO2 unless extra nitrogen was added. It was the plants that form ectomycorrhizal partnerships that responded to extra CO2 without any added nitrogen fertilizer, because these fungi produce enzymes that liberate bound nitrogen from soil organic matter, and the fungi can take up the nitrogen and pass some along to the plant.

This synthesis helps resolve a long-standing debate about the role of nitrogen limitation for plant responses to CO2. Without enough nitrogen, it is thought that plants will be unable to respond much to rising CO2, and many experiments support this idea. But in some experiments where nitrogen is in short supply, the plants still grow more with elevated CO2, and the reasons have puzzled scientists for many years. The new synthesis offers a clear answer: “Plants need nitrogen to respond to high CO2, whether they find it readily available in the soil, or whether their mycorrhizal partners can help them get it”, explained Hungate.

The research should help project climate change into the future. Forests, grasslands and other ecosystems around the world currently absorb about 30% of human CO2 emissions, without which climate change would be happening even faster than it is now. The future of this terrestrial carbon sink depends on carbon accumulation by ecosystems through plant growth. This new research shows that it is essential to take into account mycorrhizal fungi, and suggests that the next generation of global carbon cycle models should include mycorrhizae as an important control point on plant responses to rising CO2 in the atmosphere. It is well known that grasses and herbs form arbuscular mycorrhizae, and that many trees form ectomycorrhizae. Since global carbon cycle models already recognize these different plant forms, adding mycorrhizae to models of the carbon cycle should be straightforward, and the team is already moving toward that goal.

The work was supported by the Biological and Environmental Research Program, Office of Science, U.S. Department of Energy (grant DE SC0008270) to Northern Arizona University, as well as The European Research Council, Imperial College London, and the US National Science Foundation.

Hear more about this study in this short radio piece broadcast by KNAU.