Measuring the Impact of Severe Fires in the Arctic 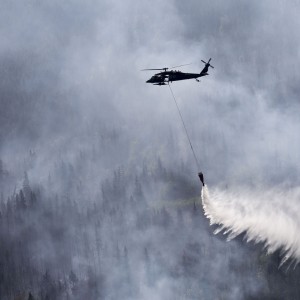 Ecoss researcher Michelle Mack is leading a $1 million NASA-funded project to measure the extreme fire activity in boreal forests and its effects on arctic tundra.

Based on the number of acres burned, 2015 is shaping up to be the second most extreme fire year during the past decade in North America’s boreal region. Historically, the area has had one or fewer extreme fire years per decade.

This season, 15 million acres burned in Alaska and Canada, according NAU’s Michelle Mack, researcher and biological sciences professor, who is leading a NASA-funded project to measure the severe fire impacts in North America.

“In the boreal region, there is a thick organic layer on the surface comprised of litter and soil, that in some cases is hundreds to thousands of years old,” Mack said. “Will more fires and hotter fires burn that layer and release it to the atmosphere and how deep will it burn into the soil?”

These questions are part of NASA’s $100 million dollar, 10 year project called Arctic Boreal Vulnerability Experiment, also known as ABoVE. The experiment seeks to understand the vulnerability and resilience in the Arctic, where climate change is most pronounced and rapidly unfolding. Mack serves on the project’s international science team tasked with implementing the field campaign.

From an ecological perspective, Mack’s work will focus on predicting when systems will be unable to recover following big disturbances, including wildfire, altering the function of ecosystems and resources that they provide to people.

“Once fires in this region burn deeply, all these other things start to happen, affecting plants, animals and local people,” Mack said. “Permafrost starts to thaw, different plant species get established, forest composition shifts and the ways that people use the landscape change.”

Permafrost contains a legacy of past climate, storing organic carbon in frozen soil. Once thawed, the release of that carbon could accelerate a positive feedback cycle between arctic ecosystems and global climate. Increasing wildfire activity may rapidly increase the rate of permafrost thaw.

Researchers participating in related ABoVE projects will determine how much carbon is stored in Alaska’s interior forests, measure rates of thawing permafrost and release of greenhouse gases, study the effects of wildfire and evaluate the socio-ecological impacts of these changes.