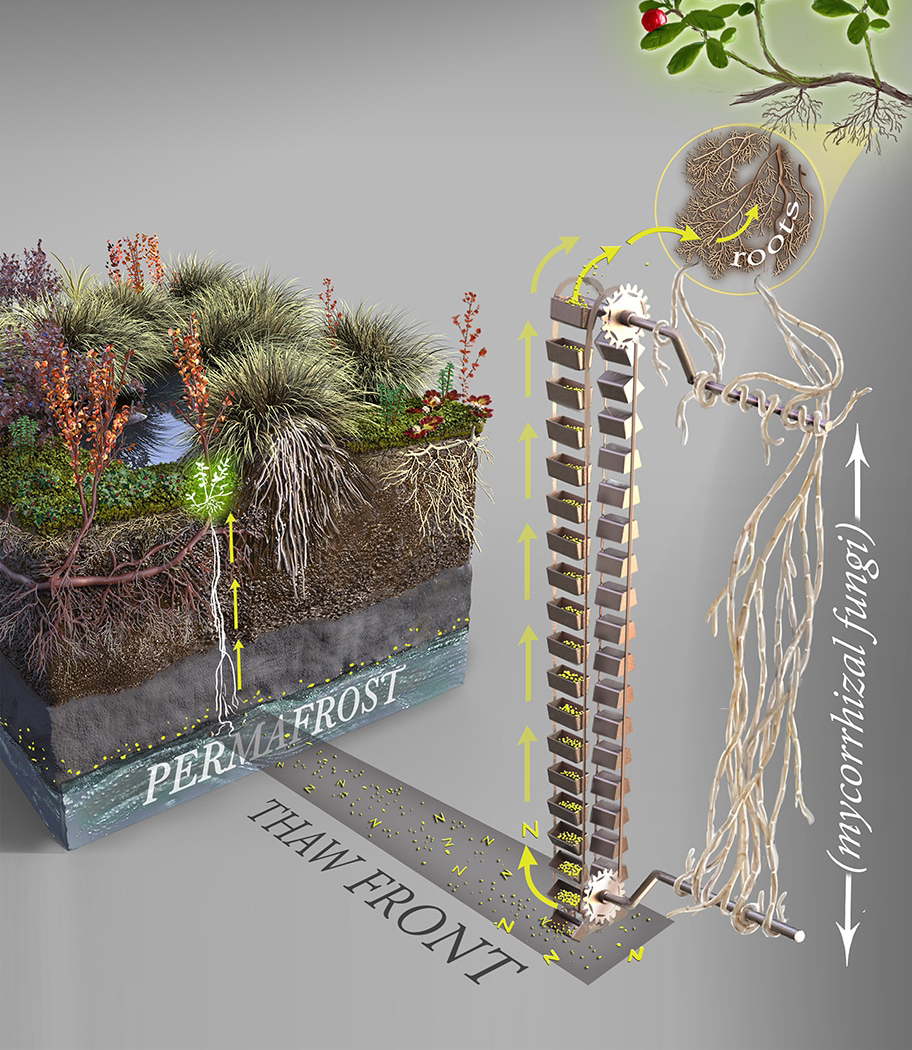 Like a long-distance food delivery app with no apparent highway, fungi that associate with shallow-rooted shrubs in the tundra are accessing deep stores of nitrogen being released by thawing permafrost. The findings by Northern Arizona University researchers, announced this week in New Phytologist, could change scientists’ understanding of who accesses nutrients from permafrost, and how.

“This just doesn’t fit the paradigm of how we think these plants and their mycorrhizal partners work together,” said lead author Rebecca Hewitt from the Center for Ecosystem Science and Society (Ecoss) at NAU. “Previously, we thought only plants with extended root systems could access nutrients near the permafrost thaw front. But we saw that all these plants were using deep nitrogen, whether they had deep root systems or not, suggesting that mycorrhizal partners may provide access to the deep, cold permafrost table.”

As researchers race to better understand the carbon cycle and how a warming Arctic will affect the amount of greenhouse gases in the Earth’s atmosphere, this discovery offers clues about where nitrogen and carbon released from thawing permafrost will go. If the burgeoning plant community in the tundra can access nitrogen as it’s released from thawing permafrost, then this fungal connection to the thaw front may be helping to offset carbon losses, since more nitrogen means more plant biomass to pull down carbon from the atmosphere.

In order to see which organisms were gobbling the nitrogen from the permafrost, Hewitt and her team, including senior author and Ecoss professor Michelle Mack, added an isotopic tracer, Nitrogen-15, to soil at the “thaw front,” or where permafrost meets unfrozen “active layer” soil, with long needles. This nitrogen isotope is heavier than the more common Nitrogen-14, and, like food coloring dropped in a flower vase, allows researchers to watch exactly where it goes. The team waited 24 hours and then harvested the plants and sampled fungi from shrub root tips and deep active layer soils. When they sequenced fungal DNA and RNA, they could see which fungi had helped plants take up the heavy nitrogen from the permafrost table. Both shallow-rooted ericoid mycorrhizal shrubs ectomycorrhizal-aided shrubs had received nitrogen infusions from their fungal partners.

Zooming out, this study could have implications for researchers and computer models that predict where nitrogen and carbon go at both regional and global levels. Hewitt said that, to date, models that account for nitrogen release from permafrost don’t treat it as much of a factor at an ecosystem scale. But if all plants can tap this source, that could change.

“The fact that deep nitrogen can be sucked up and retained in plant biomass, or possibly in fungal biomass, means there’s less nitrogen to be swept away into rivers or as nitrous oxide,” Hewitt said.

For Hewitt, the next step is learning more about whether these root-associated fungi are keeping some nitrogen to themselves, and why.

“How much of this nitrogen is being locked up in fungi? We need to learn this to understand how much of that nitrogen pool is available to fertilize plants in the future.”

This spring, Hewitt and Mack also are coordinating the launch of the Arctic Underground Network, an international research network for the synthesis of root and rhizosphere processes in cold soil ecosystems. The first meeting will take place in March during Arctic Science Summit Week in Akureyri, Iceland, with support from the International Arctic Science Committee.