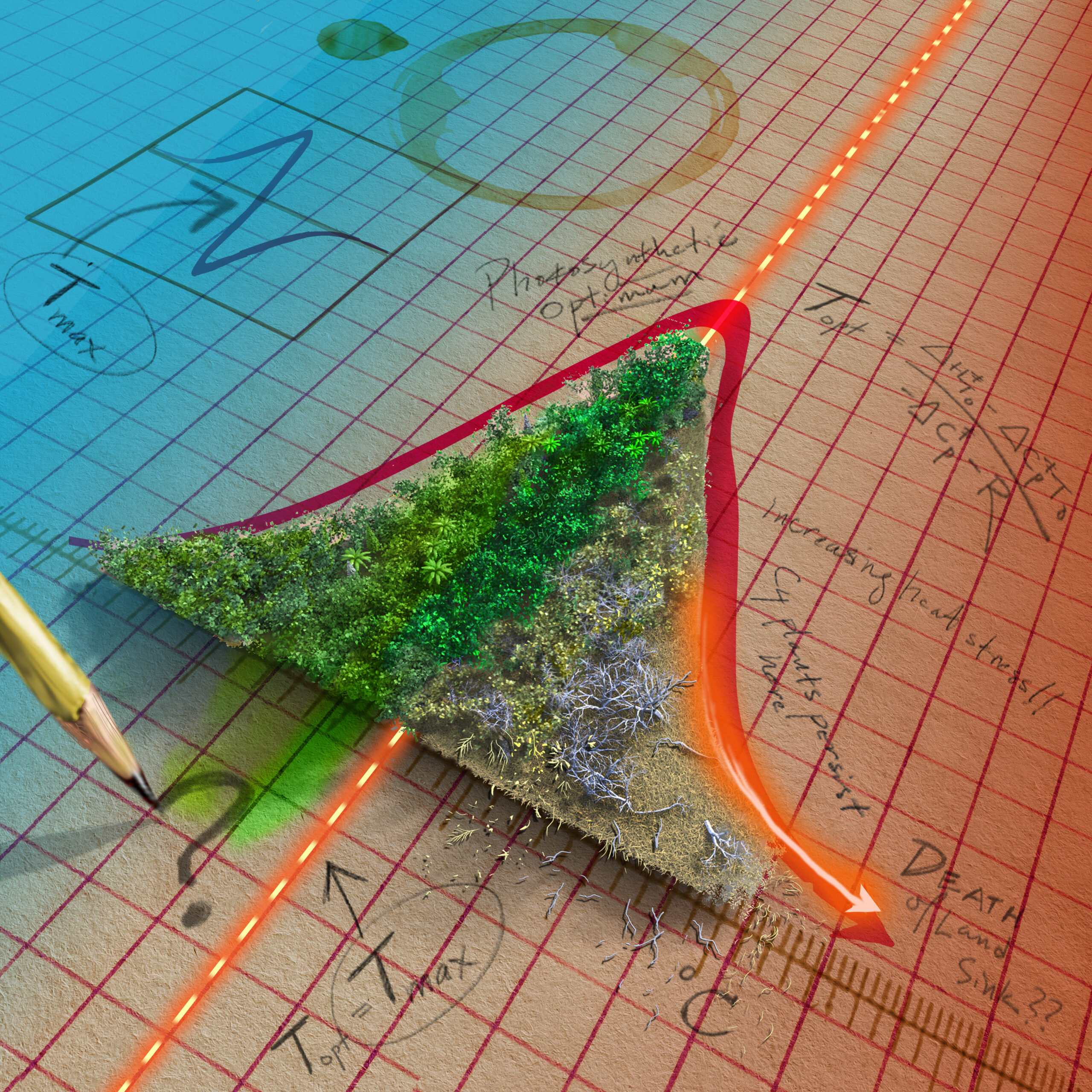 Earth’s ability to absorb nearly a third of human-caused carbon emissions through plants could be halved within the next two decades at the current rate of warming, according to a new study in Science Advances by researchers at Northern Arizona University (NAU) and the University of Waikato, New Zealand. Using more than two decades-worth of data from measurement towers in every major biome across the globe, the team identified a critical temperature tipping point beyond which plants’ ability to capture and store atmospheric carbon—a cumulative effect referred to as the “land carbon sink”—decreases as temperatures continue to rise.

The terrestrial biosphere—the activity of land plants and soil microbes—does much of Earth’s ‘breathing,’ exchanging carbon dioxide and oxygen. Ecosystems across the globe pull in carbon dioxide through photosynthesis and release it back to the atmosphere via the respiration of microbes and plants. Over the past few decades, the biosphere has generally taken in more carbon than it has released, mitigating climate change.

But as record-breaking temperatures continue to spread across the globe, this may not continue; the NAU and Waikato researchers have detected a temperature threshold beyond which plant carbon uptake slows and carbon release accelerates.

Lead author Katharyn Duffy, a postdoctoral researcher at NAU, noticed sharp declines in photosynthesis above this temperature threshold in nearly every biome across the globe, even after removing other effects such as water and sunlight.

“The Earth has a steadily growing fever,” said Duffy, “and much like the human body, we know every biological process has a range of temperatures at which it performs optimally, and ones above which function deteriorates. So we wanted to ask, how much can plants withstand?”

“We know that the temperature optima for humans lie around 37oC (98oF),” Duffy said, “but we in the scientific community didn’t know what those optima were for the terrestrial biosphere.” She teamed up with two researchers at the University of Waikato in New Zealand who recently developed a new approach to answer that question: MacroMolecular Rate Theory (MMRT). With its basis in the principles of thermodynamics, MMRT allowed the researchers to generate temperature curves for every major biome and the globe.

The results were alarming.

The researchers found that temperature “peaks” for carbon uptake —18oC for the more widespread C3 plants and 28oC for C4 plants— are already being exceeded in nature, but saw no temperature check on respiration. This means that in many biomes, continued warming will cause photosynthesis to decline while respiration rates rise exponentially, tipping the balance of ecosystems from carbon sink to carbon source and accelerating climate change.

“Different types of plants vary in the details of their temperature responses, but all show declines in photosynthesis when it gets too warm,” said NAU co-author George Koch.

Right now, less than 10 percent of the terrestrial biosphere experiences temperatures beyond this photosynthetic maximum. But at the current rate of emissions, up to half the terrestrial biosphere could experience temperatures beyond that productivity threshold by mid-century—and some of the most carbon-rich biomes in the world, including tropical rainforests in the Amazon and Southeast Asia and the Taiga in Russia and Canada, will be among the first to hit that tipping point.

“The most striking thing our analysis showed is that the temperature optima for photosynthesis in all ecosystems were so low,” said Vic Arcus, a biologist at the University of Waikato and co-author of the study. “Combined with the increased rate of ecosystem respiration across the temperatures we observed, our findings suggest that any temperature increase above 18oC is potentially detrimental to the terrestrial carbon sink. Without curbing warming to remain at or below the levels established in the Paris Climate Accord, the land carbon sink will not continue to offset our emissions and buy us time.”