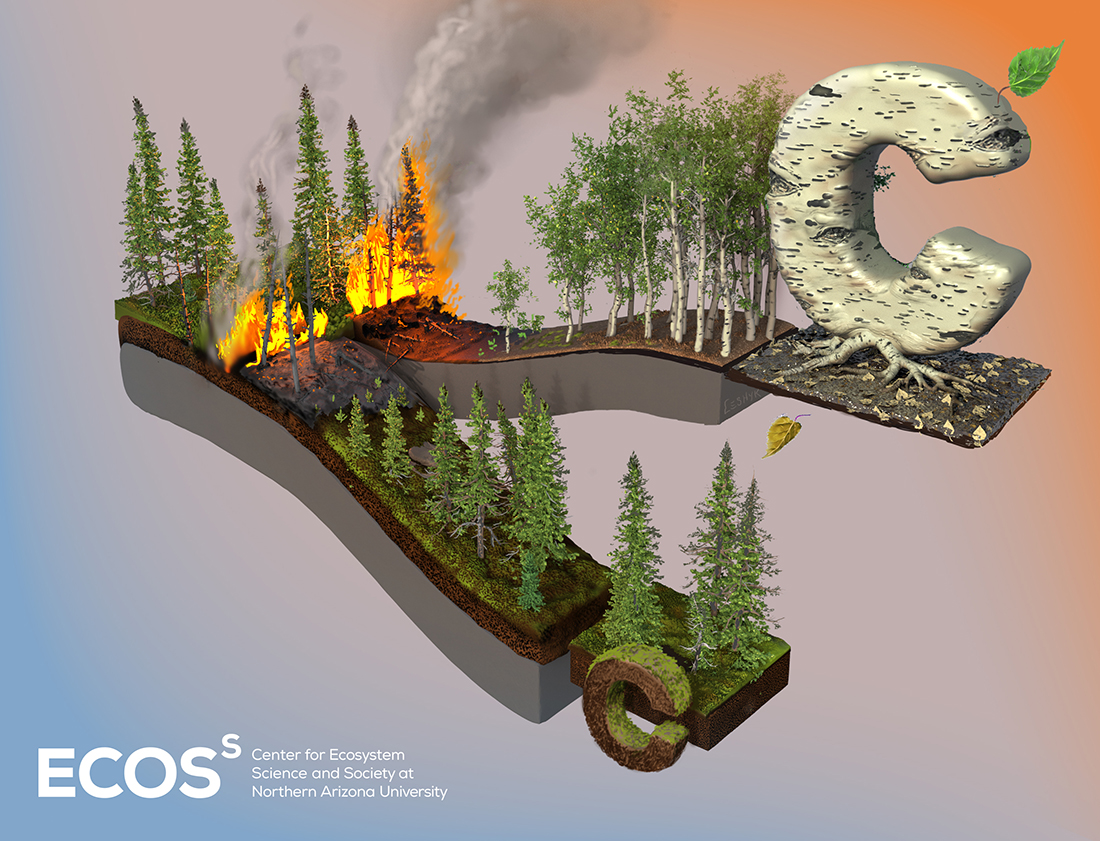 More severe and frequent fires in the Alaskan boreal forest are releasing vast stores of carbon and nitrogen from burned trees and soil into the atmosphere, a trend that could accelerate climate warming. But new research published this week in the journal Science shows that the deciduous trees replacing burned spruce forests more than make up for that loss, storing more carbon and accumulating it four times faster over a 100-year fire interval. The study, led by a team of researchers at the Center for Ecosystem Science and Society at Northern Arizona University, suggests that these faster-growing, less flammable deciduous forests may act as a stabilizing ‘firebreak’ against escalating fire patterns and nutrient loss in the region.

The study began in the wake of the dramatic 2004 fire season in Alaska when an area seven times the long-term average burned. Historically, more than half of this forested terrain has been dominated by black spruce, but after fire, faster-growing aspen and birch are replacing some of these stands. The team, made up of researchers from Northern Arizona University, University of Alaska Fairbanks, Auburn University, University of Florida, and University of Saskatchewan surveyed 75 black spruce stands that burned in 2004 and followed their recovery over the next 13 years. The team also collected a range of data from trees and soils of different ages and burn severities to construct a chronosequence, a kind of scientific time-lapse that lets researchers fast-forward through a 100-year fire cycle to see how forests recover and change.

“In 2005, I thought that there was no way these forests could recover the carbon they lost in this fire,” said Michelle Mack, a professor of biology at Northern Arizona University and the lead author of the study. “The literature is full of papers suggesting deeper, more severe fires burn more carbon than can be replaced before the next fire. But not only did we see these deciduous trees make up for those losses, they did so rapidly.”

The team found that the new aspen and birch trees where the black spruce burned accumulated carbon and nitrogen more quickly than the spruce, storing most of it in their wood and leaves as opposed to the soil organic layer. And at the end of a projected 100-year cycle, the deciduous stands had recovered as much nitrogen as was lost to fire, and more carbon than was lost, resulting in an increase in the net ecosystem carbon balance. Calculating this balance is critical as scientists work to understand the way these northern forests are changing, and the effects of those changes on the global carbon picture.

“I was surprised that deciduous trees could replenish lost carbon so effectively and efficiently,” said Heather Alexander, an assistant professor of forest ecology at Auburn and one of the paper’s co-authors. “Even though considerable carbon is combusted and emitted into the atmosphere when black spruce forests burn severely, the deciduous trees that often replace them have an amazing ability to recapture and store carbon in their aboveground leaves and wood.”

“In a region with only five common tree species, this study shows how changes in tree composition can dramatically alter patterns of carbon storage in boreal forests,” said Jill Johnstone, a northern researcher at University of Alaska-Fairbanks and co-author of the study.

“Carbon is just one piece of the puzzle,” said Mack, who said deciduous forests have other important feedbacks, or interconnected effects, on climate. “We know these forests help cool regional climate, and we know that they are less ignitable, so fires are less likely to spread. Taken together, these effects create a relatively strong set of stabilizing climate feedbacks in the boreal forest.”

But there is a lot that researchers don’t know about the fate of deciduous boreal forests in a warmer world.

“Shifts from slow-growing black spruce to fast-growing deciduous species could balance out the impacts of the intensifying fire regime in the boreal forest,” said Isla Myers-Smith, a global change ecologist at University of Edinburgh who was not involved in the study. “But it remains to be seen how carbon gains balance losses in future with accelerated warming at high latitudes.”

Mack said continued climate warming may undo the carbon-sequestering gains these trees represent. “The carbon should reside longer on the landscape because deciduous forests are less flammable. But flammability isn’t a constant. The climate will pass a threshold where things get so hot and dry, even deciduous forests will burn. So, one question we need to ask is, how strong will the mitigating effect of low flammability be, and how long will it last?”

Permafrost carbon also complicates the picture. Though many of the sites in this study did not have permafrost near the soil surface, the permanently frozen ground is found across the boreal biome. As it thaws, permafrost releases stores of carbon and methane, potentially offsetting the storage gains by deciduous trees, Mack said. “We will eventually pass a temperature threshold where negative feedbacks aren’t enough.”